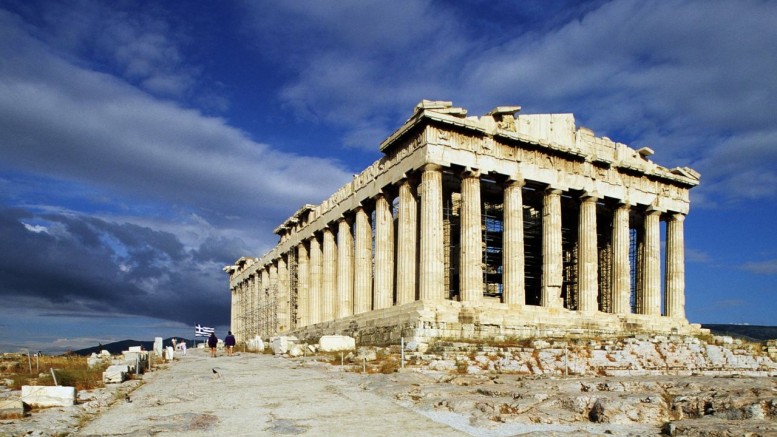 Recently, I was reading about the history of art, and I came across a section about “art historians” of the Classical world – that is, Greece and Rome, mentioning the art of Classical Greece (my favourite thing). I say mentioning, because the author makes it clear that these men (because of course, women weren’t really a big part of the Classical world…) are historians, and that when they discuss art, they discuss it in passing, as part of a bigger focus. For the ancient historians, it appears that these Greek artefacts are just objects, not works of art, and so things which we would label simply as antiquities. For example, the extensive collection of sculpture at Delphi is described by Plutarch, but only in the context of the wider sanctuary, and the work of the great sculptor Pheidias – the huge Athena in the Parthenon, and the statue of Zeus at Olympia, which was one of the seven wonders of the ancient world – aren’t the focus of historians’ pieces.  When discussing these works of art, these contemporary historians discuss the size, how they were made, the cost to make them, and, where appropriate, their degree of lifelikeness. This, of course, raises the question of whether the people of the Classical world considered the objects which we laud as works of art to be “art”.

I don’t think they did. If they did, surely their historians – like Herodotos, a Greek man, the first historian, all the way to Pliny the Elder, who died in AD79… because he wanted to watch the eruption of Mount Vesuvius – would have praised statues as works of art, and would have celebrated the achievements of the individual sculptors. Instead, they praised statues because they showed, in their content – not their creation – the pinnacle of human achievement: the perfection that could be reached by the athletes the statues depicted, who strove to become stronger and stronger, and, like the famous heroes hundreds of years before (think Odysseus, Theseus, Herakles), to excel and to be the best of the best. So should Greek works of “art” be considered as only antiquities, not works of art?

But we think that Greek vases are works of art. But we also know that the potters of Ancient Greece were essentially low-paid manual workers, and that the pots they produced were basically just fancy utilitarian crockery (like your mom’s best plate set).It doesn’t stop us from appreciating the work and hours that the painter poured into his designs on the vases, or the skill of the potter who had to try to predict what would happen to his pots in the recesses of his kiln.  So why shouldn’t these objects be considered as art, even though the Greeks didn’t consider them as such? (Certainly, my favourite piece of Greek art would not have been thought of as art in the Classical world. It’s a little drinking cup (a skyphos) depicting a caricature of Odysseus surfing across the ocean on an amphora (a storage jar), being blown across by Boreas. I think it’s hilarious.)

We consider the Ancient Egyptians to be fantastic creators of art – they built huge monuments to their gods and carved intricate tablets, and they inspired the Greeks with means to start sculpting their statues – but they had no word for art. They also had no word for religion, but that doesn’t stop us from considering them as the most religious people of the ancient world.

So perhaps these objects from the Classical world are both antiquities and works of art. Perhaps you have your own opinion. This is why Classics inspires me: because despite the fact that this is a period of ancient history, it has relevance to today, constantly promoting debate and discussion, as it has done throughout history. Because of its age, it is formed from layers of different opinions. For me, these layers of more recent history – the implications of Classics – are equally as fascinating as the Classical world itself.